The stainless motor and test stand are almost ready to test.
Waiting for some more silver screen to arrive so I can make small cat packs rather than wastefully cut up 6" packs.

I worked on putting some more storage and shelving into the garage.
(My son finally gave up on the fantasy that one might someday park a car in there)

Sunday I went out to FAR and worked on getting generator set up for Propellant processing facility. I've never had a gas motor beat me, alas the universe is telling be I'm not a diesel mechanic. Will try again next time on site.

As a science geek I enjoyed the 4 part videos from LPP power they are trying to do fusion on a shoestring and are being very open about the process. A long shot but if something like this works it changes the world..... Part 1
Posted by Paul Breed at 3:54 PM 4 comments: 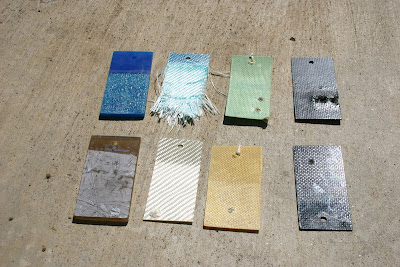 I soaked 8 composite samples in 85% peroxide for about 5 hours at 70F.
Top Row:
Bottom Row: Vipel 010 Chemically resistant vinyl ester
Experimental setup.
I set out 6 polyethylene cups with 300ml of 85% H2O2.
I tied polyester cord to each sample and placed them in the H2O2 solution.
They were placed so 75% of the sample was covered.
The Pure resin and glass fiber samples with the same resin shared a cup.
I put a clear polyethylene bag over each cup.
I periodically observed the samples.
I left them in the sun for ~5 hours.


The bags of 4 of the sample cups were clear, the bags over the two carbon fiber samples has fogged condensation on the inside of the bag. This seems to indicate some H2O2 decomposition.
It was not enough to measure any significant volume change.
None of the samples had shown any significant h2o2 decomposition. They were filled to 300ml +/-10ml and at the end they were all 300ml +/- 10ml.

I then removed the bags off the top of each cup with a long set of tongs.

After the 5 hours I was hesitant to handle the sample or move the containers as I was possible I'd created a hazardous solution. So I could not weight the samples.

After 5 hours the epoxy samples all had a layer of something floating on the top of the H2O2.
The Vipel samples had no visible contamination of the h2O2.

Then one by one for each sample (except the pure resins)
None of the samples showed any sign of detonation or any increase in energy release from the rifle shot. I did not shoot the pure resin as I expected the pure resin would shatter and not provide any additional information.

After determining that none of the samples detonated I then individually dumped each h2O2 container on the dirt. (Mojave dirt is a great decomposition catalyst.) No notable difference in energy or release was noted.

I then removed each sample from the fence and soaked them in water to remove the peroxide.
The samples are shown in the picture above. The Vipel samples showed some surface etching, ie they had an oxide layer on the surface, but showed no significant structural degradation.
The epoxy samples wer reduced to bare fiber. There was almost no structure left.

In the picture both bare resins look discolored, but the Epoxy is bubbled and distored, where the layer on the vipel is just a surface layer its very thin. It almost looks like the oxide layer aluminum gets after a lot of peroxide exposure.

The company that makes the vipel F010 has an even more resistant resin, K190 that is harder to get. The K190 is rated for 50% peroxide at 100F for years of service.
Their chemical compatibility guide

When I'd finished pouring out the peroxide in the 6 cups I had a 100 ml or so left in my transfer cup. So I put a bunch of raw kevlar with no resin in that cup. It had ZERO reaction of any kind, no bubbles, no discoloration, no steam on the bag etc...
Posted by Paul Breed at 1:34 PM 7 comments:

First test part in the bag

My first tank part attempt is in the vacuum bag and should be curing. Its been 90 minutes since I mixed the resin and its still fluid and not getting warm yet....I hope I converted drops of hardner to grams correctly for the resin mix.

It is a cold evening so.....it could just be slow

Having resin that does not go off makes a nightmare.
In any case I doubt the first attempt will be pretty....

Update the resin in the mixing cup got hard, I peeled the vacuum bag blotter felt and peelply and the underlying composite is still tacky. (Its really cold and damp in San Diego today so I'll let it sit another 24hrs.)
.
Posted by Paul Breed at 8:10 PM 4 comments:

Tanks the other hard part

The Rocket Equation has a term that is the rocket motor efficiency and a term that is the mass ratio. In a pressure fed system the biggest component of that mass ratio is the tank.
If I could make a tank identical to a 2L soda bottle only 5 to 10 times bigger that would be almost ideal. I could probably find a mechanism, to join a bunch 2L soda bottles and I may pursue that, but I'm also going to try my hand at composite tanks. Toward that end I made mold forms for a 6" diameter cylindrical test tank mold. I heated it up and waxed it with mold release and setup the vacuum bag etc.. got ready for my first composite test part.

I have something non-rocket to do tonight, but tomorrow I hope to try making my first composite part since the solar plane project.

The first tanks will have glued Mylar liners that are not H2O2 safe, but the flight tanks will have mylar/PET liners with no glue. The jury is still out if the tanks will be seamed via vacuum heat, sonic welding, or RF welding.In addition to the liner I also want the tank to be chemically resistant to the H2O2. I want any liner failures to not be immediately catastrophic.

I'm getting a bunch of samples and setting up to do compatibility testing next weekend out at FAR. I'm testing glass, kevlar and carbon fibers with normal epoxy, vinyl ester and special chemically resistant vinyl ester resins. My gut says that plain E glass with the chem compatible resin will be fine, I'm almost certain that carbon with epoxy won't be. I hope the Kevlar and chem resistant resin also work as the kevlar is a bunch stronger than the glass.

Its a multi part test, start with 30% and work your way up to heated 85 or 90%. Anything past 50% really has to be done remotely. I'm planning to soak samples in PET soda bottle bottoms. sitting in hot water on a hot plate. The sample will have a string and pulley so I can pull the sample out of the solution remotely and shoot it with the 243. I could set up some kind of hammer and anvil test, but I worry that if it goes bang, the hammer becomes a projectile.

I figure I'll get the preliminary screening done this weekend and the samples that pass will get the hotplate test in two weeks.
Posted by Paul Breed at 6:43 PM 14 comments: