This last weekend I went to the NG-LLC summit at Holloman airforce base in New Mexico. I have not been officially notified that this is not secret, but I found a bunch of references to the 2007 XPC being at Holloman on the web via Google so by the terms of the NDA its no longer secret. We got to chat with a number of the airforce people and it was a productive meeting.
I think it will be cool to fly at the base and I'm a bit worried about the red tape.
The Airforce Officers think it will be cool for us to fly at the base and are a bit worried about our lack of red tape... All in all a good balance. The Base looks like a good site if the MPL insurance issues can be worked out. A single F117 stealth fighter inside the NG-LLC flight hazard area would make the Maximum Probable Loss so high we could not afford insurance....
(I believe that holloman has the only F-117 fighter wing.) So the FAA, XPC and air force are playing with maps and trying to put us where:

Tonight I disassembled the motor I ran for 106 seconds to look for the leak.
Its very obvious that the oring was cut on the screw holes during assembly.
Charles Pooley nailed it for an explanation. I'm going to rebuild that part and try again on Saturday.


I bought a new(to me) truck since the old one died and I wanted something with a tad more creature comforts for driving to the test site. An 18 year old truck with stiff off road suspension and no air conditioning was a bit stressful. I bought a used Dodge RAM 1500 Quad cab. Its a nice looking truck, I almost feel sorry for what we are going to do to it in the next six months.

Lastly I sent my FAA/AST contact a mostly complete draft of my experimental permit application. This has been a real challenge for me as I would rather chew off my right arm than work on paper work. Many thanks to Mike Kelley (who has been asisting me in this effort) for listening to me whine and offering useful suggestions.
Posted by Paul Breed at 10:55 PM No comments:

In reviewing the video for Saturdays test I realized I have a seal problem.
The first short test:Video
The second long test:Video

If you look at the very bottom end of the motor on the first run there is a minor leak/spray where the throat seals to the outer aluminum. On the second run this is a huge gushing torrent until the copper throat gets hot enough to seal. (You can also see where this leak seals up on the chamber pressure graph)

The seal is is a a 1/8" 0.139 nominal high temperature o-ring.
The mechanical details are shown below. The pressure is about 350 PSI not trivial, but not huge either.The clearance between the copper throat and aluminum outer closure in almost zero. The motor was assembled with a rubber hammer its very tight. Its quite clear that the seal failed after the first test. Any ideas on what is wrong? 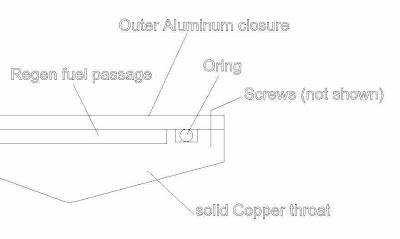 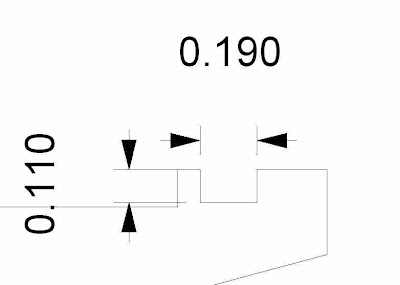 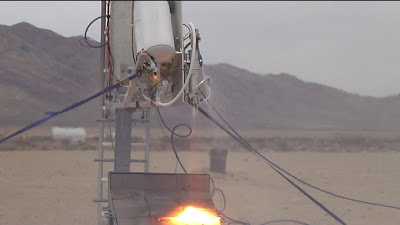 Good Motor:
We ran the 250lb regen motor again today. We ran from full tanks to depletion at full throttle, between 105 and 106 seconds. It lit a bit hard, and it had a bad fuel leak, but otherwise it was an almost perfect run. The video up on youtube .

Bad Motor:
On the way home going up the hill on hwy 14 we blew a head gasket in the truck. It took 6 quarts of oil and 2 gallons of water to get home.

Data:
The data is below. the Load cell gave me qualitatively reasonable data, but the calibration can't be right, with the measured chamber pressure and throat size, I'd see more thrust with no expansion cone at all.... alas there is something I don't understand about the load cell calibration. 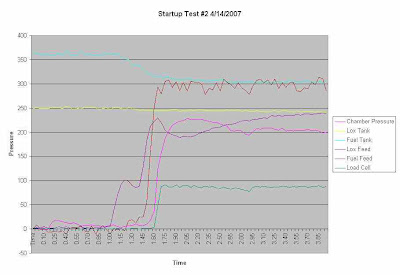 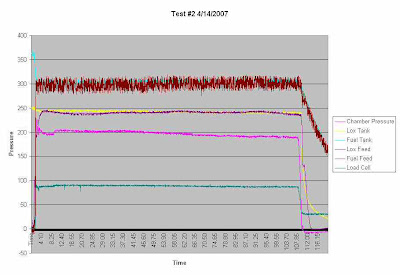 Its about 195 days till XPC, so I need to get my AST application in a
sufficiently complete state to start the clock running. I've been working diligently on that. (Its up to about 50 pages and I still have at least one hard section still to develop.) I will publish what I submit and any official correspondence from the FAA here. I will not be publishing the rough drafts and the E-mail back and forth as I don't want to inhibit the communication.

I spent this evening working on a solid copper throat and closure assembly and I should be ready to test again on Sunday. It will be quite a treat to be ready for a Friday outing to test on Sunday!
I might even get some sleep before driving to the desert next weekend.

As anyone who knows me personally knows, I'm not much for sartorial splendor, I do have a never ending collection of tee shirts with thoughtful sayings on them... Like:
Top 10 reasons to procrastinate
1.
(The rest of the shirt is blank)

Given that I think its time I had some Unreasonable Rocket Tee shirts made.
I'll probably do this through Cafe press so if anyone is interested say so in comments and I'll post the design link.
Posted by Paul Breed at 9:58 PM No comments: