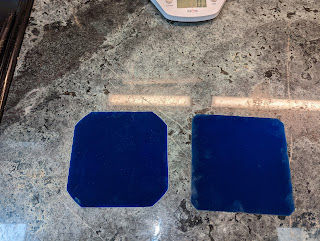 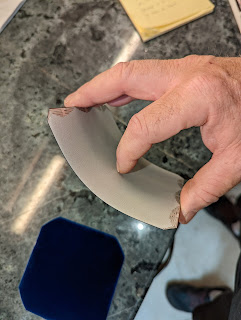 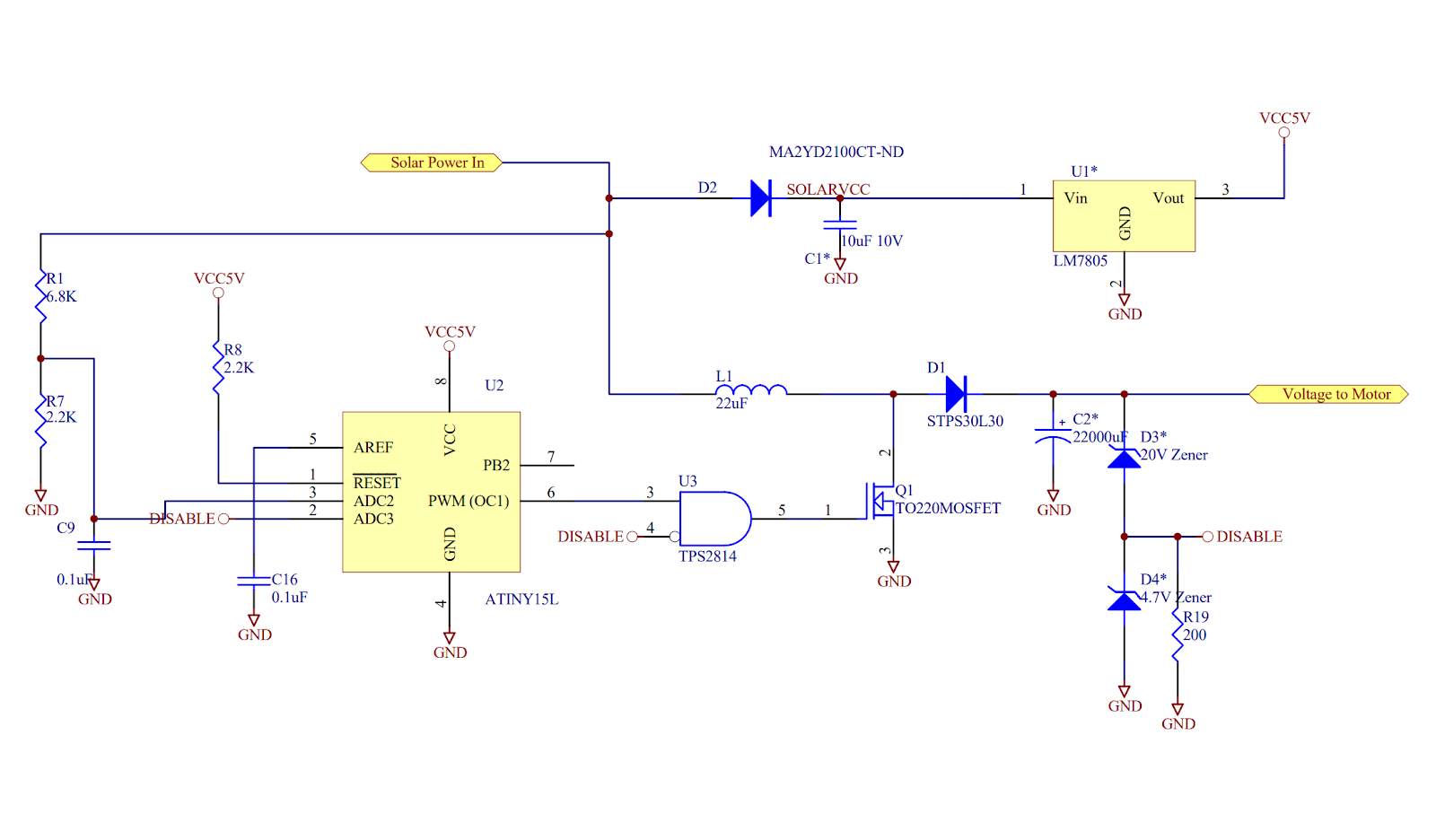 I'm a space geek, much of my social interaction is with other space geeks.
A lot of these people worship what Spacex and Elon have accomplished.

At the same time I've been more and more convinced that Tesla is going to fail.
This causes some significant personal cognitive dissonance.

The following is my attempt to work this out ...

Making a new thing is hard. You will fail, over and over again, you will fail.
Edison tried thousands of light bulb filaments before he found one that worked.

Because of Spacex:
All of this is new information in the world due to Spacex efforts.
Everything above this line is engineering....

We still don't really  know that the Spacex way will work in a business sense.
Recent layoffs and recent failed funding raise make this more questionable than it was 12 months ago. (Its clear that  the business case for the large aerospace primes, does not  work absent billions in direct government subsidies)

From an engineering stand point Spacex has been somewhat innovative....
SpaceX  have either surpassed or are approaching 50% of the total world wide launches.
In my opinion (if ancillary things like tesla don't take it out) Spacex will survive long term and the world will be a better place because of that. (see my earlier dialog on why space matters).

The space business has been run for a long time by cost plus contractors working for governments.
This is not a place where innovation thrives.

The Car business on the other had has been a brutally competitive market with microscopic  margins fought over by  efficient international behemoths. Its a hard brutal world.

Tesla managed to crack open that market and with the S and X, they  delivered  a well received  high end quality product that changed the perception of the world. Now every one of those behemoths is planning an EV. Just having a shot at this is a huge achievement...

Some how the engineer Elon that allows us to see spacex failures, has been unable to admit to the world that their are also business failures. By any unbiased measure Solar City was weeks from failing when Tesla bought it.  This burdens Tesla with a millstone that makes the difficult task of breaking into the brutally competitive car market even harder.

Watching the Engineer Elon do magic things at spacex I greatly admire  what he/they have accomplished.   Watching the Business Man Elon commit what looks very much like Fraud to save a failing business I do not admire.  Business ethics matter and used to matter to Elon (see his several year old  tweet about debts and personal responsibility for Solar City Debits)

Some how the pressure to not have the business fail has pushed pushed Elon to do things that cross the ethical line in a way that has caused me to loose my respect for Business Man Elon...

It is my opinion that Tesla is very close to failing and will fail in the next 24 months.
It is my hope that this does not destroy Spacex. Elon has generated significant personal liabilities in his Tesla dealings, and if Tesla fails the only real Asset Elons owns is spacex. Spacex will be a very different and less dynamic place when its owned by plaintive s lawyers rather than Elon.

I find the whole affair sad.  I wish Elon had stuck to Spacex and just focused there.

I know that some of my followers that see the Spacex brilliance  and subscribe toe the "Saint Elon can do anything" view will rush in to defend Tesla.
I don't want to rehash that argument here. lets us just agree to disagree and we will know who is correct in 18 months or so.

The very premise of what I’m trying to do is low cost as a primary design goal.
One has to question ALL of ones assumptions…
I personally fired the first ever 3D printed Regenerativly cooled liquid rocket engine.
ever fired in the world (2009)
I’ve done a lot of work in that space. The 3D aluminum costs are coming down….
Its cool high tech and in many ways awesome. Its also the single most expensive hardware component on my rocket by a factor of 3. For the long term business case to work I need to get the single 6” 24 foot tube cost ready to fly under $2K.  A die cast aluminum inner with a saddle jacket outer made from injection molded saddle and thin wall extruded aluminum outer is a rocket motor with a cost of under $200.00   So for the next generation of motors I’m going to abandon the 3D printed motors…
The first rocket motor I designed my self, and the 2nd liquid rocket motor I ever fired was saddle jacket, and  this generation will be as well. (113 Sec Fireing)

The following was done in rhino, I'm trying to learn how to do the same in fusion... 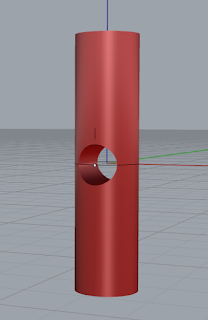 I can easily draw this in fusion a Extruded cylinder with a hole in it. 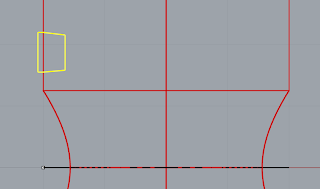 I Can also draw my o-ring groove in fusion.... 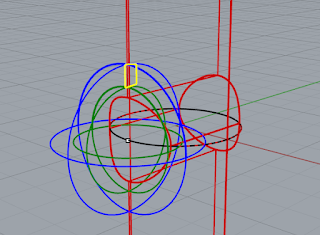 In Rhino I next draw two spheres.....(Blue and green) 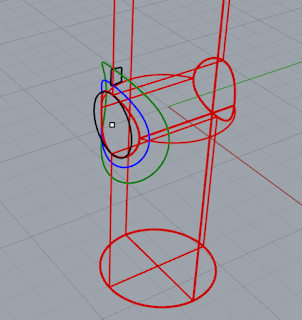 Then I generate the line where the spheres intersect the cylinder.
(Inner intersection lines have been removed for clarity)
(I did this twice and the blue/green colors swapped  sorry for the confusion) 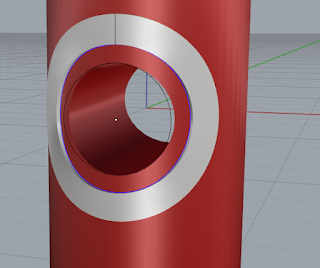 I then use the sweep2 command in Rhino to make a solid from o-ring profile and the two "Rails"
This is correctly tangent to the cylinder surface and has the correct o-ring breaks, radis etc... 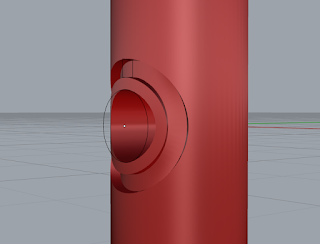 Then subtract the solid and I have my o-ring grove.

So my fundamental fusion 360 issues....
I can't draw the spheres based on points, only dimensions. The lower dimension is easy to derive its the hole radius +the oring offset. The outer sphere is a lot harder as the oring groove sides are not straight and while I can place a point in the appropriate place fusion won't let me draw a sphere to the point. That problem I could work around with some triganometry, but the 2nd problem I can't seem to solve. I need to create a pair of lines to sweep the pattern, these lines need to be the intersection of a sphere and the cylinder. I can't seem to create this geometry no matter how I try.

I thought I could reuse these end caps in the 4" 035 wall tube, alas I neglected to account for the bag.
The 0.009 on both sides or 0.0018 in diameter is enough that the caps don't seal correctly.....
Grumble Grumble....
I could line the aluminum tube with the bag and continue....


Not a huge deal, but I thought I had enough for 3 sets of flight hardware, now I have zero...
I need to machine new ones...

So even with the loose fit, I thought I'd assemble the tank and  hydro test one.
The end cap retention failed at 420PSI. The cap retaining screws failed in shear.
In hind sight I did not use enough screws, according to the screw stress calculations they should have failed at 390 psi.


So all in all its nice to actually be building and assembling hardware again.

So Mariellen's garden got its first dose of hydro test water, in about 4 years. 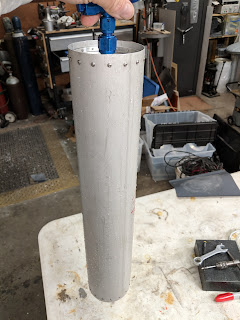 to 600 PSI without failure.

Fill Drain how to make safe...

One way to fill a tank... (and how I've filled every rocket tank to date)
Is just put a removable fitting on the top of the tank and pour in the propellant.
Its real hard to make a system lighter than just a single AN cap.

This has several problems... 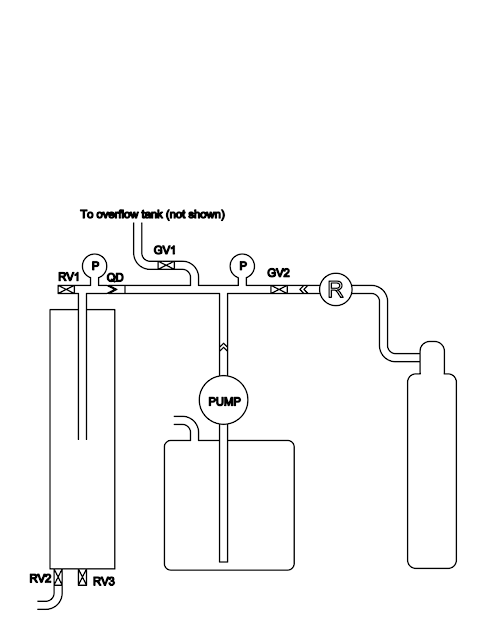 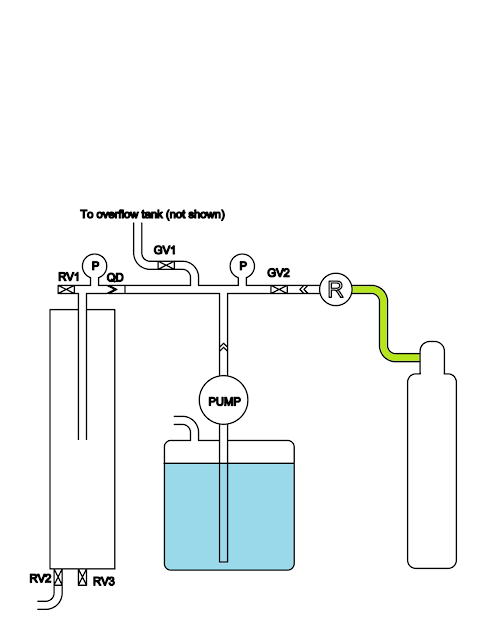 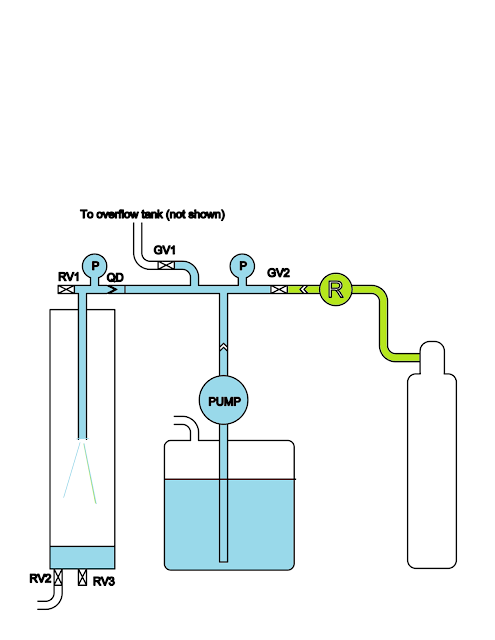 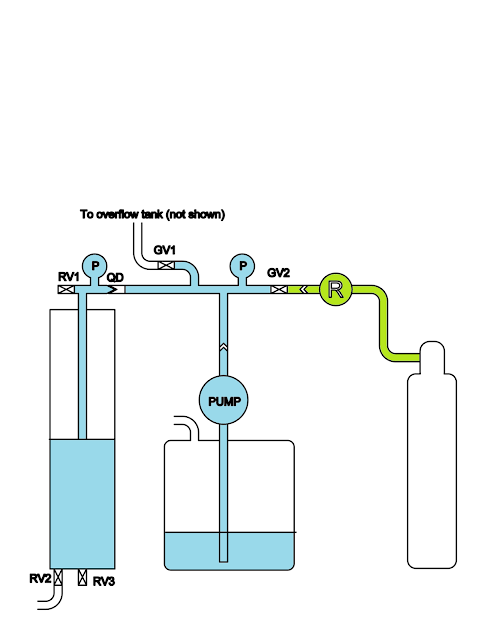 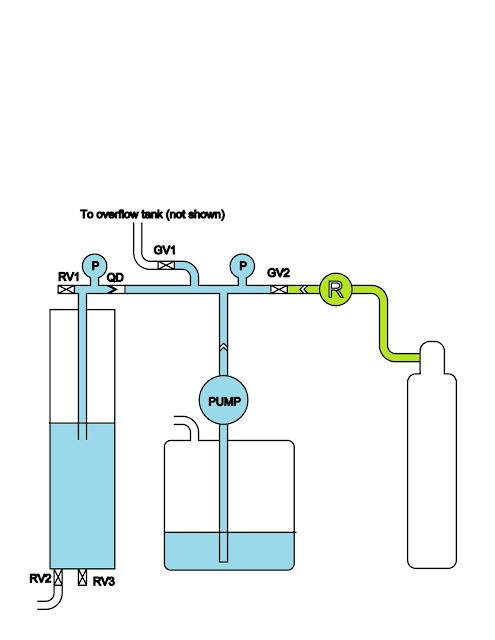 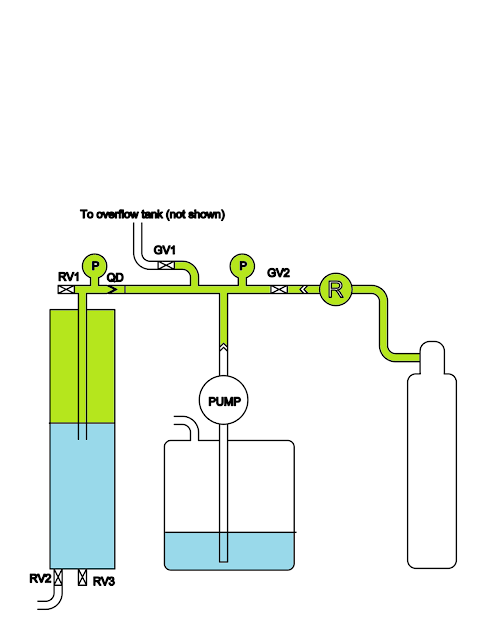 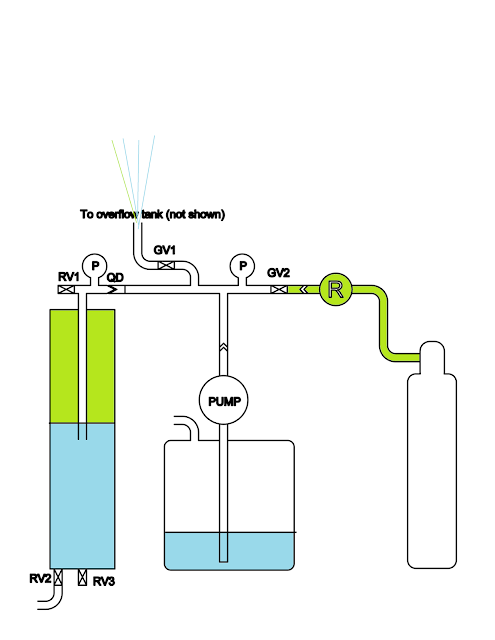 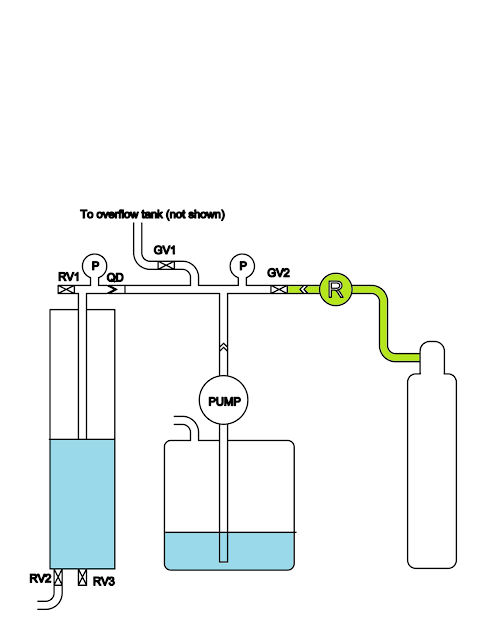 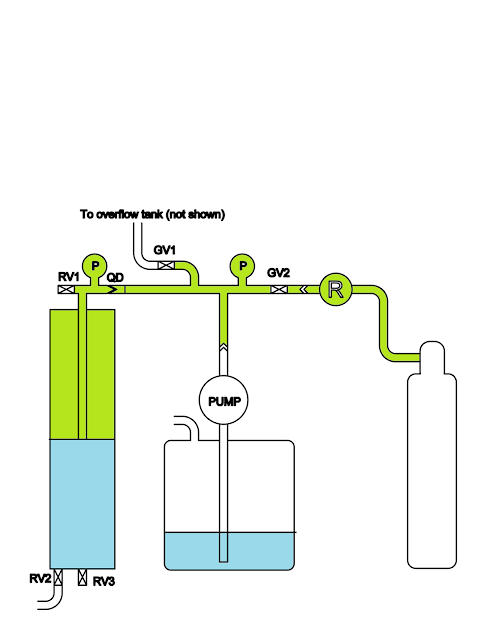 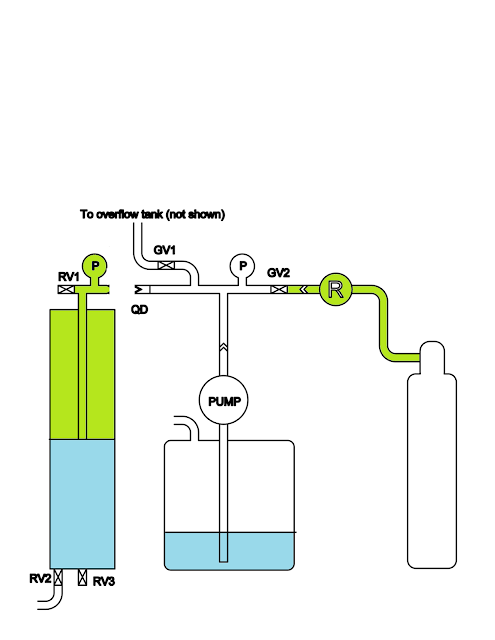 At the expense of wasign some propellant it ensures the system is filled to a precise level (the level of the bottom of the dip tube, and only requires one tank penetration.

It has the added advaltage that if you use the valve RV1 to vent the tank in an in flight abort, it does nto vent the all the propellant, only the pressurization gas.... With Lox its not an issue to dump propellant while in the air, with H2O2 dumping in the air can start a large area brush fire.

It looks like the Fuel in 20Kg lots is about 50% lower cost.
If one eventually gets to ton quantities then its down to 18% of the present cost.
So all of that is good news....

I've been thinking that I was going to have to manufacturer my own quick disconnects.
Everything I'd found was either too big, to heavy or to expensive.. (often all three)

After a help me beg on Arocket a friend pointed me at some things on E-bay that eventually led me to these... 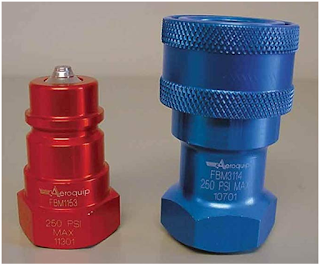 They are Aluminum, with viton and stainless internals. Off the shelf and not too expensive. The Really cool part is the rocket side is only 49gm!

They are available from multiple places look for FBM3314 and FBM1153. The only way they could possible be better is if they were AN fittings rather than pipe, and availible in multiple sizes. (For all of you that don't do high pressure plumbing, please realize pipe threads are horrible.)

In Pauls  pantheon of pliumbing....