I went out to FAR on Friday night and stayed till 5PM on Sunday.

John from Microcosm was out at the site and brought out the first completed tank to come from the microcosm/unreasonable joint development effort. With peroxide it has a mass ratio of 36,
(I earlier said 40, but I messed up the correction for peroxide density) and theoretical burst of 600psi and expected burst of around 500. So far its only been hydroed to 180 or so. 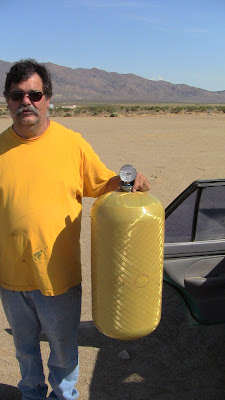 This weekend I only ran one experiment, I launched a Novatel OEMV-1HV high vibration GPS on my little HPR rocket. It was the first GPS flight on that rocket that held lock for most of the flight.
From ignition to touch down it lost less than 3 seconds of data. It lost data when the nose cone/parachute ejection charge fired, and it lost data when the nose landed on the ground and rolled around. The GPS is in the nose cone, so getting slammed with a hard ejection charge data loss is not unexpected. The GPS only data can be found
here:http://www.rasdoc.com/data/GPS9_11_11.txt

The GPS can do 20 fixes a second, but I was more interested in seeing if it kept lock so I turned it down to 5 samples a sec to reduce data size for this flight. I also sampled the analog devices IMU at 50Hz during the same flight, so if you want the data set including values from the IMU ask and I'll upload that as well. The GPS is an expensive part $1245 or so. It can be ordered without the COCOM limits for non-export usage, for another $1K or so.

Other than my one flight and the SDSU fireing.
(here: http://www.youtube.com/watch?v=zzFeqNtMftM)

The other FAR experimental projects were all plagued by Murphy.
Two projects failed to make any flames at all, and the Sugarshot test had a spectacular night time cato. Later this week look for some spectacular youtube video when they post their results.

Nature even got in on the act with some awesome thunder and lightning.
Posted by Paul Breed at 7:53 PM 382 comments:

Back from the dust...

I fixed the hacked blogger script that was redirecting.
In the process of removing 23 layers of dust from the RV.
The whole pack up and go to the desert for 5 days thing made me really think about the scale of whats needed to actually colonize someplace off planet. More later.
The wedding went off well and was kind of fun.
Posted by Paul Breed at 10:10 AM 11 comments: