Looking at various possible layouts for the bottom of the Third Stage.
(IE the one where weight really matters....) 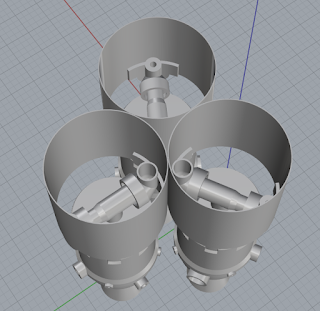 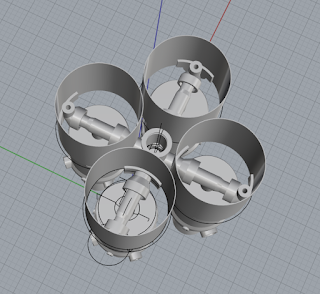 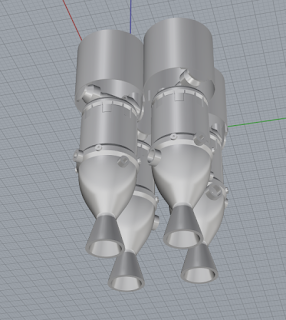 Here is a quick note about the Motor we are going to fire on Saturday... 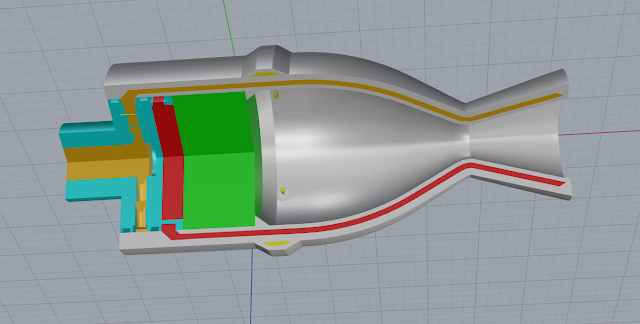 The Grey is the 3D printed motor.
The Light Blue is the part I turned and machined (4 times)
The Gold is the peroxide going down the cooling passages...
The Red is the peroxide coming back up the cooling passages... (The gold and red connect at the right end of this drawing.
The Green is the Catalyst pack that turns the oxidizer from liquid to Steam and hot Oxygen.
The Yellow in the band around the middle and in (two shown) the four fuel injectors that inject fuel just below the cat pack.

Trying to do a minimalist amateur sputnik....
We need to build a vehicle light enough with a good enough performance to get to orbit.
We need to make sure we can make it go in the desired direction.
We need to involve the regulatory agency so we can do this legally.

How do these three base requirments break out into bigger tasks...

In Process:
Waiting initial model and simulation form person contracted to do the work

To Do:
Optimize and evolve to full HIL simulator...

4)Build and Code Avionics:
Done:
Pick an archetecture (I think 75% confidence) we will use one of the tiny  pixhawk  clones for avionics.

In Process:
Find a light weight GPS that will work without co-com limits at high acceleration.
We have flown Piksi on a HPR twice continue to work on that aspect.

To Do:
Design the full code set and test in HIL

To Do:
Start discussion with FAA for orbital licensing requirements.

Spent the first half of the day cleaning the shop.... I have way too much stuff.

Then I machined the soft jaws of the three jaw chuck to grip the end of the 3D printed motors...

Then machined
Posted by Paul Breed at 9:17 PM 1 comment:

If you follow such things the Jet pack from http://jetpackaviation.com/  was subject to all geek discussion last week. Today I say an article here:http://www.gizmag.com/jetpack-aviation-new-york-flight/40286/

This describes the controls of the jet pack.....

Notice that the only video we have seen is of it flying somewhat low over water. This means in the mind of the designer its not safe over anything hard.

There is pitch and yaw control, but no roll control other than weight shift.
To me this means that the output from the two jet engines must be really closely matched.
Loose either  engine to something as simple as an air bubble in a fuel line and your spinning wildly out of control.

So how would you build a safe useful jet pack?

Useful:
Able to fly at whatever altitude fuel will allow over any surface.


In my mind a safe useful jetpack would have the following:

You don't have to always land, you can have failure induce a rapid climb to an altitude that ballistic parachute can deploy. (300 ft or so)


Rather than two motors I would think at least two per side. This means that if you loose an engine on one side all of the the other engines must have enough control authority to keep thrusting through the center of mass.  If the control authority point is above the CG (like their jetpack) then the gimbal on the good side will have to point toward the passengers legs, probably frying them.  To me this imples that the jet point of thrust vector control must be below the CG. IE the jets must move down on the human.  Then the thrust vector to compensate for rolling (or pitching) moment from a failure on the other side would point away from the pilot.  It also implies that each side have enough thrust so that if 1 motor fails it can hold up its side......

With 5 motors a side I believe you might be able to control the vehicle with just thrust throttling...

If you need thrust vectoring then a flap that you can deploy into the exhaust stream that deflects it in the  direction of the semi circle away from the pilot.

In thinking about things one of the scariest failures would be bearing failure where the motor dumps all its built up momentum in the free flying vehicle as its thrust goes away.....

I just don't see how the Jetpackaviation jet pack we have all recently seen could be made "safe" for flight over hard surfaces.

From their images JB-8 was more of a flying sled. Its real clear that the JB-8 used two TT-100 247lb thrust jets, the same as the sonix jet uses.  These are about 50K each.
(See http://www.pbsvb.com/customer-industries/aerospace/aircraft-engines/tj-100-turbojet-engine)

Its also clear that the JB-9 uses two smaller engines... AMT Nike motors.(24K Euro each)  I wonder if the motors  counter-rotate, or if they don't how much rolling moment pitch changes make given the gyro coupling.... since the  designer and test pilot are both helicopter pilots they will be very familiar with the 90 gyro force motion phase shift....

In looking at the middle of their three videos the "Gopro" one that they are using standard box stock RC turbine ECU displays for the engines mounted on the stick grips, these displays are on the tether flight video, but not the NY harbor one... or the promotional jet pack pictures.

On the tether flight video one can clearly see a large LIPO battery pack connected to the engine ECU under the cover.

Also in the NY harbor video there looks like an added frame to keep the tether training cable from getting wound around the pilots head....

Needless to say I want one...


P.S. I want to see their blooper reel...
Edited to add info on what motors they are using.