An open message for Blue Origin.

Blue Origin is Mr Bezos's company and he can run it any way he wants. If he is running it to create a profitable business with maximum advantage for B.O. then the rest of my message has no applicability.
If on the other hand if Mr Bezos has a passion for space and making the human race spacefaring then B.O.'s actions are destructive. Most of the "new space" companies are somewhat open from Space X down to the smallest garage operation. Other companies participate in conferences, they publish their success, the publish their failures, and all involved learn. B.O does none of this. They have access to everyone's information and yet share none.
In addition B.O has started filing patents that restrict the trade space. Today's news of the barge landing patent is a perfect example. Other new space people have publicly talked about barge landing of various vehicles to recover stages. I remember John Carmack talking about barge landing more than 4 years ago. Others have commented to me personally that they have written notes talking about barge landing from more than 5 years ago.

There is a huge on-line discussion base about lower cost space flight and it clearly covers this and other B.O patents. If the patent is challenged the patent will be clearly invalid, but if it is issued it will cost millions to have it declared invalid. This is a huge expense to any small organization that might want to use that technology.
So if Mr Bezos's intent is to help get the human race off of the planet, please don't be evil, try being more open.

Addendum:
I am not anti patent, but the patent needs to actually be innovative.
Vacuuming up common sense, not adding anything new, and attempting to patent that, is destructive. This is just a make work patent for patent attorneys. No real new ideas, and if you want to use one of the concepts covered in the claims one will now have to go back and find reference to the prior art, document it, and budget funds to have a lawyer defend your position.
I won't go line by line to refute the claims, that has already been done in several forums by myself and others.

If the patent actually had some new art, say:
Then you would not hear a peep from me about it.

Thursday we had a delivery of new clean propellant. So we got up at 5am and drove to FAR.
We waited three hours for the delivery truck who thought the road was still to rough so we met him at the end of the pavement and took the delivery the rest of the way in our truck.

We then set up the test stand and fired the stainless DMLS motor. It was much better than last time, but we still have catalyst issues as we were not getting full decomposition. The beginning and end of the very long run were identical so we are no longer poisoning our cat packs.!!
I think I need to add some anti channel baffles.

The test stand worked flawlessly and set up to fire time was less than 45 minutes with just two of us.

After we finished that I went back and made another attempt on the generator:

I replaced ALL the banjo fitting seals and soft feed tubing. After doing that the prime pump was much more solid and priming was faster and seemed less random. The Motor still did not run.

Then I removed the side panel (Item D in the picture from two posts ago) and tried to figure out what moved when your moved the shutoff lever..... nothing moved.....

Now when you move the shutoff lever you could see moment inside the area exposed by cover Item D. When the motor was turned over the outlets made little sequential squirts.!!!!

After fully reassembling everything the Generator started on the second attempt.
We then cleaned up the oily mess inside the generator enclosure from all the bleeding.
We buttoned up all the covers and ran it one more time. We now have a generator!!!!

Many thanks to Dave Weinshenker for the diesel help. He deduced what the problem was and provided me the information I needed to resolve the issue.


I should have data and possibly video of the rocket motor test in the next week some time.
I won't have much time this weekend as my Dad fell down and is in the hospital (Nothing major, he should be out Today) We also have a 99th birthday celebration for my Step Mom's mother this weekend.
Posted by Paul Breed at 8:42 AM 12 comments:

A Plan for tanks.

The rocket equation has two parts structural efficiency and motor performance. Since the beginning of our project we have spent considerable effort thinking about structural efficency.

Clearly modern composite structures hold real promise for improving structural efficiency. I've dabbled in composite structures but I am very much a beginner. The tanks produced by professionals like Scorpius Launch Systems/Microcosm are both amazingly functional and beautiful. It would take me a decade to acquire that level of expertise. The recent composite coupons I tested for peroxide compatibility were fabricated by Microcosm/Scorpius. I'm currently riding home from a meeting at their facility where we finished the details of a joint development program to build peroxide compatible liner less tanks.

I think this is a win win for both parties Scorpius will get a new product line and we will gain access to world class tanks.
Posted by Paul Breed at 2:30 PM 8 comments:

I spent the day at FAR trying to get the diesel motor running.
I sent the following note and picture to the vendor I bough the generator from. Any ideas from the peanut gallery? I realize the text is kind of rough, but it is part of an ongoing conversation.... 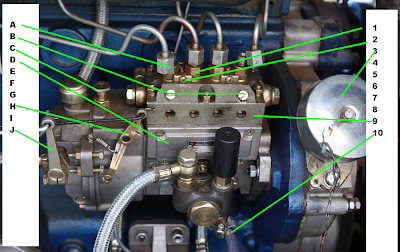 I've attached a picture with parts labeled.
I still don't have it running, so I'll explain.

Today:
First thing I did was fix the return plumbing on top of the injectors.
I did not end up replacing the injectors as when I got the new bolts it all sealed up.
The return line that goes from the right end of the injector string down to the filter was rubber and leaking so I replaced it with the new metal part
I got from you guys.

Between each step below I'm loosening the screws #B and pumping the little pump until I get clear fuel with no bubbles.
I'm treating screw B like one treats a brake bleed, you need to close it while clear fluid is coming out so it does not suck in air.

So after fixing that and priming and bleeding I try to run... nothing.

The I remove the left most injector line nut #A (shown removed in the picture)
when I crank no fuel comes out the empty fitting, nothing not even a drop.

Then I remove all four nuts, and nothing not even a drop from ANY of them.

I open cover #3 and lift up the plate and turn the motor over to make sure gear inside is turning. It is.

So one of the guys says diesel pumps have shear pins and that could be it.

So I remove panel #D and turn over the motor, you can see the plungers moving up and down so the shear pin is probably good.


At this point I text you.
So for the next step I remove the screws #2 and then unscrew the left most two fittings #1 and the one to the left of it.
Inside are little plungers and springs, the plungers may have been stuck but the are now free.

Then I reinstall the springs and plungers and turn the motor over (after bleeding) and noting comes out.

So I remove #1 again and manually operate the prime pump and fuel comes out.


A couple of comments
The Hose #10 is really stiff and too big for the nipple, I really can't keep it from leaking air.
All of the banjo fittings on the inlet side of the world seem to have non metalic seals that are dried out and leak.
These were some of the seals I asked you for, but I've removed #10 and the banjo fitting behind it and all the fittings going to the first fuel filter,
I've brought these home and I'm going to get new seals and new hose before I go back out.


#J is fixed and I'm guessing it should not be adjusted?

#H moves all the way counter clockwise when you try to start, I'm guessing that that is the ONLY shutoff the electronics has for the motor?

#C What is this and does it do anything?

It takes be 4 to 4 1/2 hours each way to go the the site.
I've now been to the site 4 times to work on the generator. not counting time on the phone at home or asking researching at home
I've spent close to 50 hours working on this what should I do next?

Did you guys actually run this motor at your office? (based on the way it was packed I'd guess no.)

So realize this motor has NEVER EVER EVER run, so what else could be wrong?