Observations from the fireing

Even with the short run it answered several questions I've had about H2O2 Kerosene motors.

From the previous mono-prop runs its clear the cat pack is not working very well The metal monolith seems like it needs finer channels.

Even with a partially working cat pack ignition was almost instant. Reading the available literature ignition seems to be a strong function of  contraction ratio.

One of my personal questions was can you run an H2O2 motor like a traditional bi-prop where the peroxide is thermally decomposed in the chamber?  With a generous L* of 60 and contraction ratio of  almost 4 at a chamber pressure of 200 psi the answer is no.  There was clearly undecomposed peroxide in the plume.

This camera gave its life to provide you with this video.

3 Months to go and beyond.

The 2009 NG-LLC ends on October 31st, just over three months from now. Seems like a long time but it will go by in a flash. This week I’m cleaning up the blue ball  removing some excess wiring, freshening the cat pack etc. If all goes well we will try a 90 second Tethered hover on Saturday.

What happens after 2009? If the any of the 180 second prizes are un-won we will obviously attempt that. Beyond that we want to work toward a reusable sub-orbital vehicle.  Anything that can do the 180 second flight should be able to get to over 100K ft with just a tiny bit of Aerodynamic cleanup. Or success of failure at claiming the prize $ will set the pace on that effort.

Looking forward low cost access to space is a civilization changing event. Today you have a few well funded efforts in that direction SpaceX Blue Origin , Virgin Galactic/Scaled. You have a bunch of bootstrap organizations, Armadillo, Masten, Xcor, JP Aerospace etc... You have a few that failed along the way, Kistler, Beal(I really like Beals technical approach), and some that were absorbed into the edges of traditional aerospace such as  orbital.

As a somewhat successful business man  with a passion for space I’ve burned a lot of hours thinking about how to build a space company that makes business sense.  It is a significant chicken and the egg problem. No matter how well thought out my business plan is no one is going to hand me a 100M blank check to go chase after spacex.  Yet without real commercial market driven, bare knuckle no holds bared competition in space access we are all stuck on this rock.

It may be possible to slowly build up and bootstrap a company from marginally profitable sub-orbital to something orbital, but it will take tens of years and I’m just not sure I have the energy to put 200% into this for that long.  On the flip side I don’t see anything else that is really worth doing. That dilemma, understanding the magnitude of the task and at the same time seeing it as a truly worthy task actually has me a bit depressed.

Some days I see the people sitting on the beach with a beer in hand and ’m jealous, other days I see that as a waste of human potential. My wife thinks this whole project has driven me over the edge from committed to obsessed. What can I say, I’m an unreasonable man. 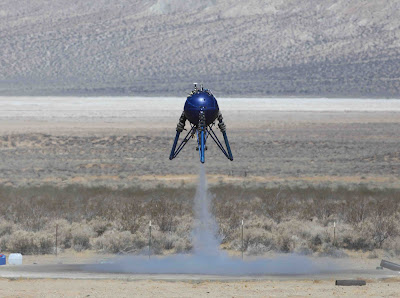 (Thanks to Kevin Baxter for the Photo)
The Landing was perfect, more later in the week once I recover from the 111F days in Mojave.
Video onboard
A Video from Ben Brockert
VideoFrom the ground.
Posted by Paul Breed at 3:24 AM 15 comments:

We have four major projects for this trip in order of importance.

There will be a TV crew on site Saturday and all the FAR regulars have been asked to bring their best “show and tell.”

My basic control loop is as follows:

I reality steps 1,3 and 4 are PID loops(proportional integral differential) , I’ve been running for a while with  Step 1 P,I step 3 p and step 4 pd. For hovering this works just fine as what I really care about is holding position. Any bias in the system is taken out with the integral term in the position hold. When I start navigation from place to place that does not work so well. It’s beginning to look like I need properly distributed I and D terms on each loop. For example a helicopter does not hover with the frame level, my current helicopter hovers with a 12 degree to the right and 5 degree nose up from its resting position on the skids. I could carefully tune the centers of all the loops so these biases don’t effect the control laws, but they seem to vary with somewhat randomly.

I’m in the process of trying to change to 1:PI,3:PI,4:PID as I get each loop under control I have to turn down the gain in the outer most loops as the gain was cranked up there to handle the biases not taken into account with the integral terms.   I have a simple utility that runs on the laptop and allows me to tweak gain constants without recompiling things in the field. It also allows me to assign one constant to a trim lever on the RC transmitter for tuning. I’ve flown  about 30 times in the last week trying to get all this sorted out on the helicopter.  I’m going to have to tune the rocket as well, but hopefully I’ll be more efficient with that after learning on the copter.

I started with 10 variable slots, and have now moved to 16 variable slots. I was having a hard time making sense of it all until I discovered today that when I did a cut copy and paste on the UI that sets gains, the channel being assigned to the “trim” lever was the wrong one, olny  if I was trying to set one of the 6 new channels, so the trim lever made things change, but not what I though it was making change so it was all very confusing arghhhh…

I’ve fixed that tonight and I’ll try again after work on Tuesday, or maybe not, I’ve been reading some David Weber snipits aka “book crack” and amazon tells me the book in question has been shipped and I will get it on Tuesday. no more rushing to the site to see the latest installment on Mon,Wed,Fri ;-)

*Since I started on a helicopter I’m using that coordinate convention, where what is typically done for rockets is to call “roll” rotation around the nominally vertical actuator.

Several items of interest in the NGLLC news. Masten Space has announced they are  planning both a Level 1 and Level 2 attempt, and Armadillo flew the super Mod for 178 seconds. It looks like there are presently three teams with flyable vehicles in active testing. It should be interesting.

I’ve spent the last week working on navigation and control with the helicopter. I’ve been chasing things like the natural frequency of the rotor interacts badly with the Z axis accelerometer for some interesting aliasing. (The vibration on the rocket looks like white noise, the vibes on the helicopter don’t.) I’m also working to improve the navigation accuracy as that will be key to winning if there are multiple successful LLC teams this year.

This coming weekend the 11th we will be out at FAR and hope to fly the blue ball and static test the silver ball again. I think this will be a big FAR weekend with a number of interesting things going on.