My FAA application has been declared Complete Enough. You may read it here:http://www.rasdoc.com/FAApermit/Public_Permit90_2008.pdf

The really hard core can compare and contrast with last years here:

I’ve given up on my Video camera, last tyime I moved it away from the action and had it zoom in, it still cut off part way through the test. I’ve ordered a new HD camera from Amazon that uses all solid state storage. I have high hopes it will be better. Please note that in the last section of the video we were sweeping the throttle valve from 0 to 100% trying to map chamber pressure.  Video is Here

I reviewed my Data and I found two problems….

1)Only one of the three legs is properly feeding catalyst. This explains the early shutdowns.

2)The chamber pressure transducer calibration is wrong, as this is a 4:20ma transducer, and the zero is in the right place I don’t know what is wrong. I’ll have to do a pressure sweep. 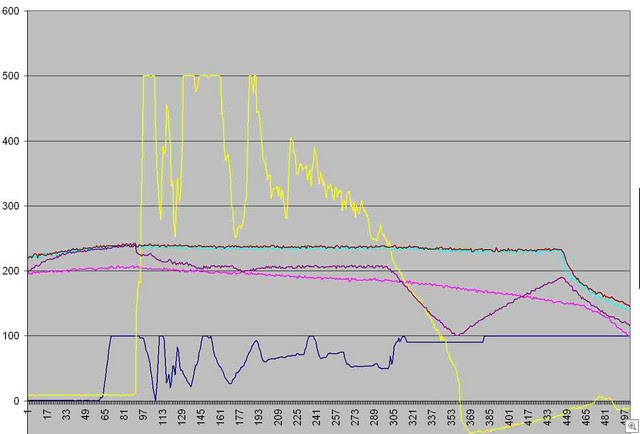 I’m back from my trade show in Fl, I hope to catch up on my Unreasonable data this week and publish results from last weeks test. I’ll also be posting my FAA application as it has beed deemed complete enough.

It was a 22 hour day. We went out to the desert and poured concrete for 6 hours then began rocket testing. We poured the anchors of our tether testing trapeesze, and helped finish the flame trench on the FAR large vertical test stand.

We did a short 15 second or so test fireing, at full throttle. We ran out of permangnate before we ran out of Peroxide. Other than a tie down problem during setup that was the only issue.

We then helped someone else setup a test (can’t talk about it).

After their test we tested our vehicle for longer duration, it was supposed to be a minute, but again we ran out of permangnate early, we need to adjust the permangenate flow down.

We tested throttling and vane actuation, everything worked it was a very positive test. I have video of the first test, the camera shutoff during the second test. I have had zero time to review anything as I have a plane to catch in 2 hours and I will be doing non-rocket business stuff until next week.

I’ts 4:45 am I have the its to early pukeing feeling. We are going to the desert to test. The vehicle is 100% physically complete. Every bracket, valve, cable, screw, nut and bolt. I still have some software to do, but the physical part is done. If this were more than a static test we would probably not meet the crew rest rules.

I’v finished the revised application and submitted it. I expect it to be declared complete enough.

I’m out of town all next week, I’ll try to post results before I leave.

The reason I could not origionally  publish this years application was because the location information was under NDA/uncertain. Now that Xprize has formally announced its not under NDA.

In the interim I received a letter from the FAA asking for some paperwork changes.

So now that the venue is now public the document needs revision. I hope to resubmit the application this week. When it is declared complete enough I will publish it like I did last year.

Posted by Paul Breed at 6:41 AM No comments:

I’m sorry I have not provided much input in the last two weeks I’ve been working on a bunch of related issues, but not making much direct hardware progress.

I’ve seen much on-line discussion of the Google Lunar X prize. Its a cool prize and significant purse, but I think it pales in comparision to the briliance of the origional X-prize.

I think a good prize should have several charactoristics:

I think the world really needs a low cost access to orbit prize. The primary barrier to becoming a spacefaring civilization is the cost to orbit. The traditional players have no incentive to really change this.

Enough pontificating for one day. Those of you who have followed my blog for a long time will know we lost our 15yr old dog in October. Last Friday we acquired a 3 month old puppy from the Hellen Woodward anmial shelter. I’ve spent the weekend playing with the puppy, I only built one rocket part all  weekend.