For the last two months I've been working on improving my physical self. Next year I turn 50 and its clear that some attention to self maintenance is no longer optional. I've been running, carefully controlling what I eat looking at things like nutrient levels unrealized food allergies etc... So far I've lost 25 lbs, I am sleeping better, fixed some weird digestive issues etc... I'm starting to feel a whole lot better. For the next few months this is going to remain my primary focus, but I'm starting to have some spare brain cycles to devote to interesting projects. The only problem is I have not yet picked one. Its almost an embarrassment of riches as I have far more things I'd like to work on than I could ever possibly do.

Here is the list of what I've spent some time on in the last three months:

Here is the short stream of consciousness list of projects I'd like to do, and that I've spent some time sketching or thinking about.

Everything with a * is applicable to the NanoSat challenge.

So many choices so little time.....

The original tank shown in the last blog post did not pass hydro it failed at about 180PSI where the integral liner failed. This tank was desiged for 500PSI burst.

So the second attempt used a slightly different process for the liner. The liner actually turned out lighter, but it was so light that is started to buckle during the overwind process. We were targeting a 1000 PSI tank this time and the logitudinal windings for 1000 PSI were done, but the tank started to buckle after only about half the circumference windings. When this happend the tank was removed from the winding machine, slightly presurized and put in the curing oven.

Based on the partial winding the tank theoretical burst value was just over 500 PSI.
Today the tank burst at 500 PSI. There appears to be general stress all over the tank, but the failure was fairly catastrophic showing that the fiber matrix was distributing the load correctly and the failure was not a point failure. All in I'm very happy about this result.

With 85% peroxide the tank that just failed at 500PSI (Even with double the needed longitudinal windings) has a mass ratio of 36!!!!

We are about to make tank V3 and will modify the fixture so we can slightly pressurize the liner while winding.

Here is a picture of the tank. 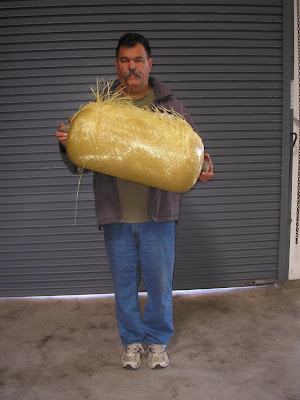