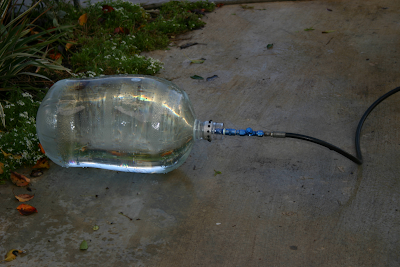 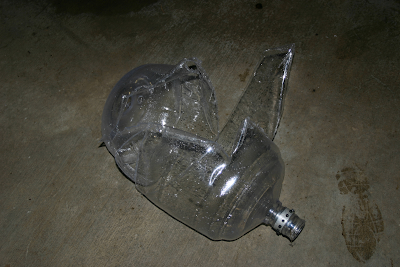 Betterbottle makes 5 and 6 gal PET water bottles. I could only find a source for the 5 Gal, so that is what I tested.

Empty 674 gm
MR with water of 29 with peroxide 39!
Burst at 125 PSI.
Long period of plastic deformation at around 100 psi
It burst in the thin center with the ends remaining substantially thicker.
This means one could probably prevent the banana deformation and increase the pressure with a center overwrap.
Posted by Paul Breed at 5:03 PM 25 comments:

Way out of the box presure system...

Another out there concept... this won't work with the muiulti segment tank of the last wild idea, but will work for a single tank.

In a H2O2 rocket 80% of the propellant volume is H2O2, so you need to pay more attention to the H2O2 side than the fuel side.

Leave a small space at the top of the H2O2 tank. In this space put a solid silver screen/catalyst hung from a thermally compatible string. Unwind the string into the tank letting the silver decompose the H2O2 pressurizing the tank, raise and lower the catalyst to control pressure.

Fuel is pressurized with a bladder from the gas in the main oxidizer tank. 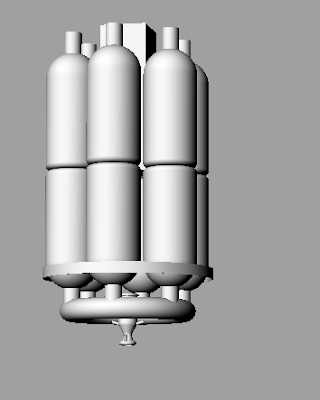 The "goodness" of normal rocket tanks are usually rated by the PV/mass. The best aerospace composite tanks, like the Scorpius pressurization tanks used by Armadillo in the 180sec super mod can have mass ratios of better than 9 at 2200 PSI working pressure. If you could scale this to a 200 PSI tank then you get a water filled tank mass ratio of >80. The fundamental problem is for the small sizes we are talking about you can never get that low. The tank wall would be paper thin. At small sizes the issues are minimum gage not minimum strength. (Hard to beat a soda bottle 0.25mm thick. )

As soon as you go up in size bigger than minimalist nano sat launcher then properly built aerospace quality tanks are a must.

I also suspect that when fighting minimum gage issues going up in pressure for a tiny launcher can have benefits in motors size, expansion ratio, flow path sizes etc....
A big puzzle with too many knobs.

UPDATE:
Here is a link to the specs for high quality aerospace tanks...
Posted by Paul Breed at 6:37 PM 17 comments:

A salute to the Military etc...

For my U.S. followers remember the Americans that voluntarily offer to pay the ultimate price in defense of this nation. Reguardless of how you view the current conflicts, you can not help but be humbled by the voluntary sacrifce these men and women give in our name.

Give them something, I contribute every year to http://www.lbeh.org/
Posted by Paul Breed at 3:49 PM 15 comments:

In trying to determine the scope of a Nano sat launcher project I generated the following list or physical hardware. There is an equivalent scope of work for Ground support, Software, Logistics, Regulatory issues etc...

Congratulations to spacex.
The scope and scale of what Elon and his troops have accomplished is just breathtaking.
I am in stunned awe.

I raise a toast to a most unreasonable man!
Posted by Paul Breed at 2:06 PM 7 comments:

We went out to FAR setup the teststand, and the little stainless motor.
The temperature was really cold (45 F) and the cat pack never warmed up. By the time it would have been warm, it was dead, due to contaminated peroxide.

I disassembled the cat pack and dropped the screens in the peroxide dregs from the Jug we loaded from and there was almost no activity.

I then got a jug from a different batch and tried that, no activity.

As a Final test I took a fresh clean screen and the screen that sat in batch 2 and put both in my beaker of peroxide, there was a big difference in reactivity, something is definitely contaminated. My Peroxide supplier thinks it was phosphate and has redone his proces to remove phosphate.

The end result is that engine tests will have to wait till I can get new peroxide or get my spargeing plant up and running and make my own propellant. The current tall pole in that process is diesel generator problems/waiting for parts.

In the mean time I'm going to work on tank development and some guidance and control electronics.
Posted by Paul Breed at 10:48 AM 7 comments: