The Saga of the humming birds, too tired to get pictures and video I have of the before conditions together.
Will do so later.

A Humming bird builds a nest in our front entry way on fragile shrub right in path of traffic.
So we put a step ladder in front of the nest with a sign that says go around watch out for nest.
All is well for a while, the mom and dad bird tend the nest and the eggs hatch.

Last night when we came home around 8pm the fragile branch failed turning the nest upside down. Dumping one baby out on the ground, Mom bird was frantically buzzing around in the dark bumping into things. We righted the nest and taped it to the ladder to keep it upright

Mom did not return to nest so we tried putting here back on the nest she did not stay, she flew away.
After 1/2 hour with temp in low 50F we brought the nest and one baby bird inside and placed them in a large Christmas cookie tin. Put tin floating in pot of warm water (bird stayed dry, tin floated on the water.)
Put a small thermocouple on the nest and regulated temperature manually to keep it around 90F all night.
Not much sleep for wife and I, after getting this set up we decided to go back outside a look for second bird not in nest, found bird on sidewalk, very cold and barely moving. Brought it in warmed up and put in nest.

Fed some sugar water to both babies. (I know they need protein too, its all we had)
Stayed up all night, at first light Put Christmas Tin with nest in it on top of ladder under bush where nest was.

Mom came by, got in nest fed fed baby. Then pecked side of Christmas tin flew around wildly and flew off.
(All this activity was observed 10 or 15 feet away from inside through window)

Replaced tin box with a piece of wood with a hole the right size for nest to sit in.

Dad bird came by and fed both babies off an on all day. Never saw mom again, but did not keep a close watch.
This afternoon we went by the backyard bird store and got some humming bird food with insect protein in it.

Tonight after dark we check the nest, no one is sitting on the nest, no mom, no dad, getting cold again down to 55F not sure what to do brought nest back inside. Went and got small heat lamp and have the heat lamp shining on the nest with thermocouple in air next to nest under heat lamp. Will stay up long enough to insure that temp has sabilized then go to bed.

Current plan is to return the ladder and nest to its correct spot just before daybreak in the morning.
Hopefully dad bird will keep feeding them.

The babies have their pin feathers and some more substantial feathers on wings. but don't seem to have their eyes open yet. Not sure when they hatched. Not sure if this is the best course of action....

From a philosophical stand point, it's just a few grams of almost inconsequential bird feathers,
In the scheme of things would I be doing a more significant service to nature/GAIA if I let the little ones die and did not burn resources driving around gathering things to try and save them? I've spend $ and time that might remotely make sense if I were a vegan (I'm not). How can I in good conscience eat an animal that is smarter and closer to me in the scheme of things (Beef) and at the same time spend a sleepless night and a good part of this evening helping a tiny bird that may or may not survive and in any case will not understand my efforts?

A tired brain can barely ponder such things.


Morning Update.
I've been told by a Humming Bird expert that Mom does not sit on the nest after 5 days or so.
So Not having mom on the nest at night is normal.
I put the nest back out this morning and have seen Mom feeding them at least twice.
I captured some poor video of her feeding them here

I changed the camera angle and its recording, sometime tonight I'll go through the hours of video and try to post better pictures.

I've also been told that "Dad" is a threat not a helper.
Here is a picture Mariellen captured of "Dad" on the nest the day before it fell down. 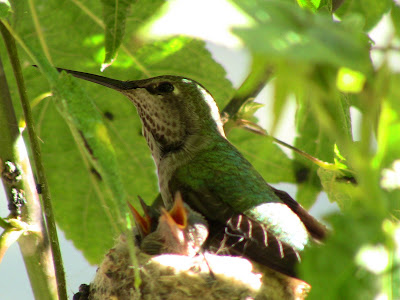 Something new more in line with a HPR than orbital launcher. 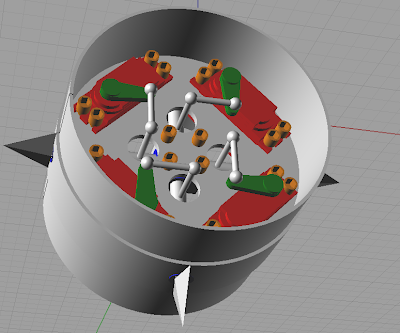 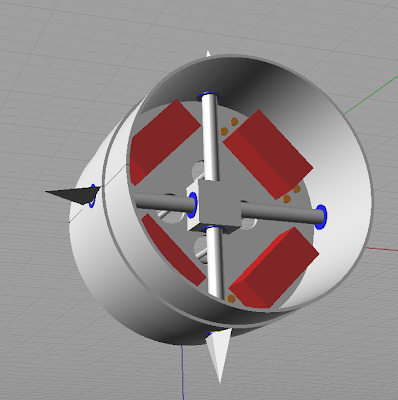 The Tasks for a good simulator.

The LLC hovering vehicles were fairly simple to model. Fixed local frame of reference, constant air pressure, fixed magnetic dip and declination all in all slow enough that one could basically ignore air drag. One could model the vehicle dynamics using a simple unchanging world in Cartesian coordinates.

I've spent the last 2 years thinking about what it takes to build an orbital vehicle. A very rough first pass can be done with a simple how much delta V do you need. A more refined tradeoff needs a more refined model. Ultimately I'd like a full up hardware in the loop simulator that I can run full missions on. Writing such a simulator is a bit of a daunting task.

Just modeling the complexity of the "World" as you fly around it is non trivial. Starting with what reference frame do you use: Lat Lon altitude? , North East Down? Earth centered fixed. Earth centered Inertial? (Probably ECI what epoch J2000?)

A whole bunch of things that used to be fixed for the LLC simulator now change...

One could refine the vehicle model with a simple 2D model of a spherical earth and launched from the equator, Yet there are questions that can't be answered without these details. Just one simple example, I plan to use a MEMS IMU, GPS and Magnetic sensor to keep track of the vehicle position and orientation. MEMS IMU's drift really bad (0.1deg per sec is typical for a mems gyro) A better Laser gyro is much much heavier.

This is correctable if you have a couple of outside references to keep things aligned. In aircraft its common to use gravity and magnetic field to "erect" the gyros keeping then aligned. On a spacecraft under thrust you can do it with GPS velocity an accelerometer and a 3D magnetic filed sensor. The accelerometer measureing thrust direction in a body frame is compared against the GPS measured acceleration in an absolute frame (Say ECF), In reality these two vectors measure the smae thing so these two vectors gives you one absolute orientation vector. The magnetic field gives you another. This will fully define the corrections you need to apply. If some where during your launch the magnetic field vector and the desired thrust vector align too closely then you really only have one reference vector and your orientation is ambiguous in roll around that one vector. You might say that orientation on that axis does not matter, and that would almost be true, but if the orientation changes from the desired trajectory and you want to correct back or close the loop, you must have a full orientation solution to steer the rocket.

So do they ever align? I have absolutely no idea. Does this mean I'm limited to picking only certain orbits? Maybe? When the rocket stops thrusting and coasts I loose my orientation again, can I start thrusting for a circulization burn and learn my orientation quickly or is it more efficent to steer into a direct injection orbit with no circularzation burn.

Doing a direct injection burn has a delta V penalty, is this penalty larger or smaller than the hardware weight cost to have the 3rd stage motor restart? Is the find my orientaion with quick thrusting penalty in delta V greater or less than the mass penalty for a simple sun sensor, or tine CMOS start tracker? Inquiring minds want to know. The whole conceptual rocket has way too many knobs.

Trying to organize this monster project into a modular individually testable coding campaign is quite daunting.
Posted by Paul Breed at 7:09 PM 51 comments: