The Static test went off well. I still need to reduce data, but visually and audably it had good decomposition. The only technical faults were a problem with the auxilary data recorder (did not like the 200M Ethernet cable had to add a hub) and my brand new 2 month old video camera was DOA. So I recorded no video, but Charles Pooley got a good still shot from inside the block house. Thanks for all the good luck wishes. 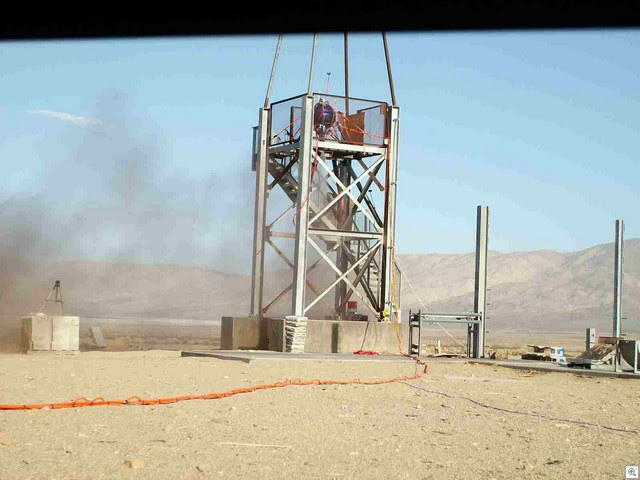 This picture was partial throttle, we throttle the Peroxide, but the Permangenate runs at full tilt for the entire run so at low throttle we get an excess “Purple” haze. We Arrived about 7:30pm. We got the vehicle on the tower, strapped down and  were all ready to load propellants at 8:30pm. So we spent the night watching the glorious stars in an absolutly perfect evening, 75 degs and a light brreeze. We got up  loaded propellants and fireed at about 7:30 am. We were cleaned up and drving away by 9:00 am.

Once more into the desert....

It’s 2:30 PM, we leave for the FAR site in about 10 minutes. We hope to do another static test at daybreak Sunday. Wish us luck.

The contest is in 60 days. Based on what we filed for our FAA application we need to do the following tests:

the location we test is a voulenteer effort, we can only really test on the weekend, we have te following days until the event:


We have to buy the event insurance at lease 30 days before the event. ($30K to $50K)So we have 4 weekends before the insurance trigger The Aug 30,31 weekend will be spent retrying our static test, provided I can resolve my issuse before then.

Some thougts on the problems. We have three problems:

Our Permangenate flow is not what it should be. We designed this system to just turn on the permangenate and let it flow at 4% of full thrust for the duration of the flight. This is done via a blow down system with the permangenate stored in the  the legs. In our last test the legs depresurized before the end of the run. It was quite clear that we have a leak in the presurization side of the system. It could be Sliding O-ring Seals on the Legs, Leak in the plumbing, leak in the vent valve.

Our Throttle valve seems to have to poor of control for the peroxide flow, at 20% open we have full flow. So we sill need to reduce the size of our main valve. I’m going to try and accomplish fixing both of these this week.

We have big osscilations in the chamber pressure. We are goin to add some baffels, possibly reduce te size of the chamber slightly.

Posted by Paul Breed at 9:17 AM No comments:

We did a static test today. Ilearned several things:


I’ll post some of the data in the next few days.

The Shoe makers children have no shoes.

The Software guy’s rocket has no software. I’ve made my living doing embedded control software for about 25 years. I am the software architect for my company Netburner. NetBurner does not do much end use software, we put together devlopment environments that others use to build products. Somewhere in the world there are around a  million embedded devices running my/our NetBurner RTOS and TCP code. Things like:


The Hardware is 100% complete on the rocket. I’ve unit tested all the comm links and subsystems. I was hoping to be ready for a final fullup static test with ALL of the flight ready software in place this weekend. Alas I have a bug, the worst possible kind a “hangs up and goes silent bug”. I’ve worked on it all day, and its kicked my butt. On Sunday I’ll modify the watchdog hardware to trigger a non maskable interrupt rather than a reset. Then the NMI routine can give me a little info about where its hung up when the watchdog goes off. Arghhhh!

Reality is we are only going to have the 90 second vehicle ready.

Most approproate team theme song: Up all night by the boomtown rats.

Most apropriate team saying: “Sleep is a no credit elective.”

Good news/bad news… Bad news the Team sponsorship I was working on fell through, the good news is my primary business has been having a good year and money to finish and compete will not be an issue.

Spacex and Hardware is hard.

This weekend I spent Saturday afternoon glued to my computer watching the drama that is a spacex launch. The Launch once again proves that hardware is hard.

When he started SpaceX Elon had never managed a company that builds hardware. Elon is a really really smart guy and he will  learn to build hardware, it just won’t be as quick or as superior to dinospace as the original power point slides said it would be .  I visited spacex about two years ago. The Staff was very young, a lot of fresh out of college  enthusiastic kids. It was probably the brightest group of pure brain power I’ve ever encountered.   Elon created a vision that was bright enough to attract 100’s of the best and brightest to actually get their hands dirty and build real hardware. They choose spacex and not web 2.0 or  wall street.  SpaceX now has 500 + employees and as these bright young minds learn to build real hardware they will become an invaluable national asset.  I hope they can get up and try again and again, it may take another 5 years until the organization learns what really matters and what doesn’t. Just don’t give up, I for one will enjoy watching them succeed.  If I could give them one piece of advice it would be to  remember to play a little bit along the way. The spacex director of propulsion Tom Muller not only used to work on rockets professionally, he built rockets as a hobby. Tom used to build and fly small liquid propellant rockets out at the RRS. This lesson should not be lost , things one builds with ones own hands teach valuable lessons that are not to be found in any text book.

This was also a sad week for another Software guy builds hardware story. Vern Raburn was Microsoft employee #18, he was very successful at Microsoft. 10 or so years ago he started Eclipse aviation and set out to turn general aviation on its head. He planned to build thousands of light jets sell them for less than 1M and change transportation as we know it. It did not turn out to be as quick or as superior as the original power point slides said it would be. When Vern started there were no very light jets, today there is the Citation Mustang, The Eclipse 500, and soon to be offerings from Diamond, Embrair, Piper, Cirius and others. Vern changed general aviation, he just won’t be running eclipse any longer, he was recently replaced as eclipse CEO.

Hardware is hard is a lesson I’ve been learning for a long time. My very first full time job out of college was for an 8a set aside minority owned business. The  company had been quite successful doing paper research reports.  The president of the company kept seeing RFQ’s go by his desk to build hardware he thought “we can do this”. The company went from 0 to 40M in sales in 4 years, it went from 40M to zero in 12 months. It imploded when all the hardware jobs had huge cost overruns.

You can see the same scenario repeat itself over and over.. John Carmack started Armadillo 8 or so years ago. The armadillo team has learned to build low cost robust hardware, but its taken years, they had to re learn lessons that every hardware builder must learn.

If you read my Experimental permit application ….

a)You won’t have insomnia and

b) you will realize that there is a 100% seperate safety computer box.

That safety box has not been necessary to test things up til now.  Now it is becoming the limiting item to be ready to hover. It receives commands from the flight computer, data from the GPS , data from the RC receiver and sends status to the main computer and commands to the catalyst valve. 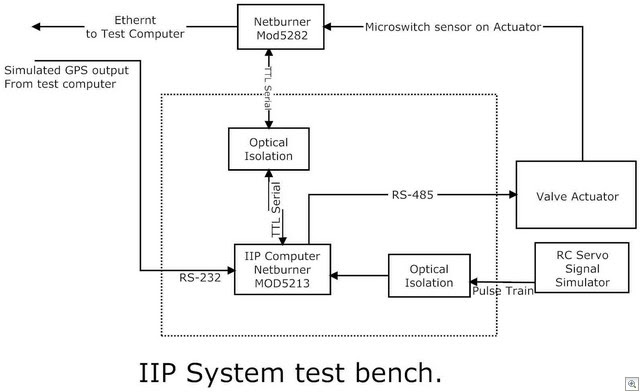