The end of 2007
We took the complete vehicle out to FAR to do a four engine static test this weekend. We had a number of transport issues. We finally settled on a U haul trailer. 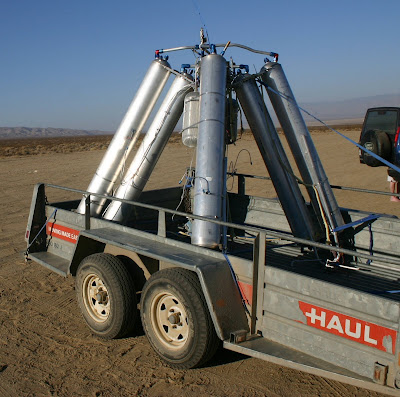 With the motors mounted the vehicle did not fit. So we unmounted the four motors. This left a fair bit dangling plumbing. Realize that this is a trailer with leaf springs and no shocks. The trailer is rated for 4500LBs we put 230 lbs in it. WE then drove for three hours to Mojave. We stopped early in the trip to check the tie downs and again at Mojave. By the time we reached the Arco station in Mojave we had either damaged the plumbing or shaken the hardware off of the valves for 19 of the 21 valves. The trip killed the vehicle. This ends the 2007 effort.

This is a lesson in construction. WE need to pay more attention to transport with a "Real" suspension and we need a lot more plumbing support brackets etc...

Also what are we doing with 21 Valves?

On Each Quadrant: (4 each for 16)
Main Lox
Main Fuel
Lox Throttle
Fuel Throttle

This is part of our problem. We could not get the ball valves to throttle/operate fast enough for our throttle and we could not get the fast butterflies to seal so we doubled the quadrant valves. If we had more time we would had fixed the big ball valves with shims and shaped orifices, removing one whole set of valves. We applied a quick fix and it failed.

Going forward/Don Quixote
We have 34 days till the practice session at the NG-LLC site. We have 41 days till the contest. I made a spread sheet with a list of the tasks necessary to compete. I made an optimistic and pessimistic time estimate. If I stopped going to work (I've been working 4 days a week) and worked full time for the next 41 days, the optimistic schedule says I have 7 Extra days before the practice session. The Pessimistic schedule says I'd be 4 days late for the contest.

My Day Job is CTO of Netburner, I'm one of the founders and the success of that company is the source of funding that makes Unreasonable Rocket possible. In the last year I've been putting most of my creative efforts toward this project and my business has suffered as a result. How much more do I commit? These are agonizing decisions. The Logical decision would be to suspend the effort for this year and restart if there is any prize money left after the contest.

Evaluating other teams for 2007/2008
I've been trying to keep track of the other teams and Judge the status of their efforts. There are 9 teams. Armadillo is as ready as anyone is ever going to get. Unreasonable Rocket is not going to make it in 2007. Two teams dropped out by not making the summit. That leaves five teams. Two teams have privately told me they won't make it. One team has asked if they can share test days with me at FAR,I Said yes, no problem. (If they are just starting serious rocket engine tests they won't make it) One more team privately told me they were giving up on the 180 second contest for this year. This leaves one team unknown for the 180 second flight. Only Armadillo has anything posted on the FAA website. I have to conclude that it will probably be the Armadillo show this year at XPC.

Even Armadillo has some issues, they crashed texel and have a supplier problem with their graphite chambers for long duration high pressure operation. (180 seconds). If I were a betting man I'd give 90% odds that there will still be 2nd place 500K available next year.

This has been the most difficult post to write, I know a lot of people have been following and rooting for the father and son team and I'm sorry to let you all down. Be assured that we will continue. We will probably take a month off to rest. Tonight I'm going to do something I have not done in a year. I'm going to sit a and watch the Chargers Patriots game. . I spent 10 years living near Boston, GO Pats, I've spent 15 years in the San Diego area, GO Bolts. So I don't know who to root for, but it should be a good game.
Posted by Paul Breed at 5:03 AM

It has been an awesome possibility to watch you on this valiant effort. Thank you for sharing it all so openly!

Announcing that you will not be able to compete this year seems to be the only realistic thing to do. It would be a very unwise decision to sacrifice ones living for a (marginal?) shot at the races this year, when it is very probable that there is prize money left next year. (My guess is that AA has 90% chance of winning level 1 and 2, but that's it for this year, no other prize money will be dealt).

So there should be (will be) prize money left for 2008. And we'll be able to continue rooting for you in the future. :)

It's time to take your well earned rest and recharge your batteries for next years competition! Ad Astra!

I'm very sorry to hear you won't be competing this year :-( On the upside, at least you'll not be putting yourself through hell trying to do the impossible. BTW. I really enjoyed reading your updates, best of luck in 2008.

sorry to hear, but betting on next year having prize money available is a pretty safe bet, so prudent decision.

big thanks for letting us all in on all that.

It was a very good try. It's taken Armadillo seven years to get where they are, and even with the great advantages of reading their journey, it's still a long learning curve. Congratulations on the progress you've made so far, and I look forward to seeing further great things from your team next year.

And 2008 is close! Have a short break for now, you've put a lot of effort and can be somewhat proud of that too. You perhaps didn't make the whole way but you made some good progress in the mean time.

Paul, such a big challenge for such a small team in such a short amount of time.... the odds were stacked against you and 'Murphy' didn't help. Shame you didn't have more weight on that trailer; it was essentially unsprung with such a light load.
All the best for the future. I've enjoyed reading your blog and seeing your youtube posts, and living vicariously through you as my projects never get that far.
All the best. Phil (455rocket)
PS Enjoy the game.

Sad to hear that you won't make it. But nevertheless I think it was the right decision. It requires a great deal of professionalism to make such a decision.

Netburner sounds interesting. I presume we're talking about the embedded networking solutions, because other Netburners seem to be located elsewhere outside of the area.

A mere hickup on the road to success. We wish you all the best as this bird takes flight in the near future. We look forward to your blog updates as well.

Keep up the great work Paul!

The game was not that good the pats stomped the bolts, it would have been more fun to spend the evening in my shop. As for the comment about NetBurner go see www.netburner.com.

Thanks for letting me know about it, excellent information. By the way thanks to Generic Viagra I found it this.

Hello, I do not agree with the previous commentator - not so simple

I always come across and read line by line the post, whatever topic do you can post. I think you need even more time to do it as well since the first. I'll waiting for that. By the way, the trailer is rated for 4500LBs we put 230 lbs in it, and you've right on it.