This weekends motor tesoting started out with a lot of little issues.Not the least of which was sleep deprivation. We finally got them straightened out in the early afternoon and had two successful tests. The second test was operationally perfect. For some reason we did not get chamber pressure, but the light was perfect and the motor ran really well until we ran out of helium pressurizing gas at about 95 seconds of run time. (The previous minor problems used a lot of helium). the two key events were:

1)The motor started correctly. This was the result of using a lox lead and pre-flowing the igniter for a few seconds.

2)We did a number of throttle step tests with the new fast butterfly valves. From the gathered data we were only really throttling the fuel side, but the response time and the fact that the motor ran down to 75 PSI input pressure was really good news.

I was manually operating the valves in an open loop manner and the response from giving the step up/down command to seeing the mach diamonds change was instantaneous to my perception. Lastly we had a teperature probe in the fuel feed and we are ok for heat load. At full throttle my guess is we are getting some boiling, but not extreme boiling. The video camera shutdown about 15 sseconds into both tests. I'm beginning to wonder if the there is some sort of IR oscillation in the motor that is commanding the camera off. The first 15 seconds with the first throttle step at the the end of the video is here I'll put tape over the IR remote port next time. The gathered data is below: 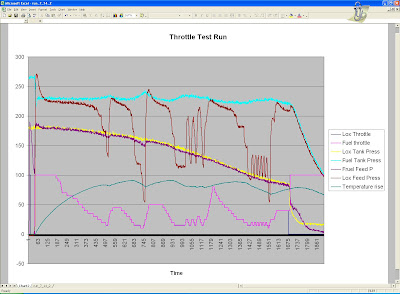 I'm happy to hear good news from your project; I really hope you'll be flying at the XPC !