My  current concept for a flight weight tank is a carbon tube with a poly liner inside.
I machined some end caps and John Newman gave me a flight weight carbon tube.
The first test failed because the retainer plug on the end had the glue fail, so I sanded the area better and I'm waiting for the glue to dry to try again. 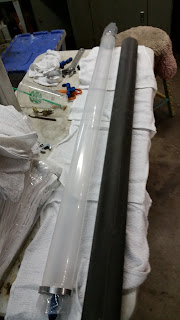 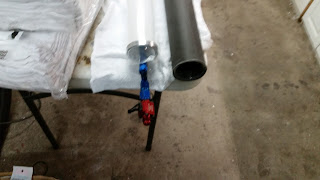 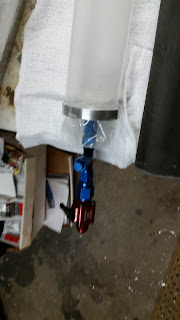 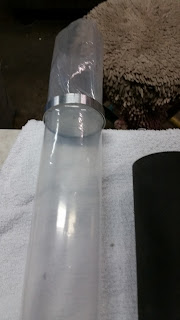 Thats hardware project #1.   hardware project #2 was my idea, but the majority of the work was done by Monroe King.  its the spectra operated valve concept I posted about a week or two ago.  Monroe machined a beautiful valve and I then proceeded to make it ugly. First I just used a 1/4 20 bolt with a slot cut in the head and  filed smooth for the retaining rod.   Second I needed 8 fittings to get from the 1" diameter valve body to the right fitting for my hydro tester. I also did not have any nicrome wire so I used some 0.032 stainless safety wire instead. Attached is a you tube video of the successful valve test... 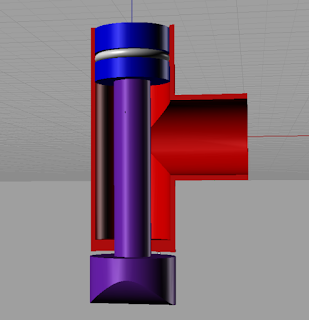 We had to use an outer ring and set screws to keep the Al endcaps on even after glueing in place.

Having made more than a few very lightweight solid motor casings from CF/epoxy, I can tell you that you'll have more luck gluing an outer ring of cf/epoxy to the cf tube than you will trying to glue an aluminum ring to the tube. For the cf ring, I figure about 1,000 psi shear strength for the glue line, meaning that you need about a one inch long ring for a 2" tube (to withstand 1,000 psi internal pressure). I doubt you'll get that much shear strength with your aluminum ring because epoxy just doesn't adhere as well to aluminum as it does to cured cf/epoxy. The upshot of this is that for glue to work on a large-diameter tube (say 8") you're going to need a long ring which is going to chew up a lot of your tube length.

On the other hand, if you go with screws, then you'll probably need to reinforce the ends of the tube to gain adequate bearing strength for the screws.

My tubes are 3 layers of uni-cf (4oz/yd, 700 ksi), one axial, two radial. I add half a dozen or so wraps to the ends to get the required bearing strength. In the 2" diameter, with a .005" polyester liner, my tubes come in at about 4g/lineal inch and proof test at 1700 psi (the limit of my test gear). I'd be interested in knowing what the tube in the photo weighs.

Started life as 3" diameter 48" long tube 254gm.
I shortened it some to give me clean bond for the retest.

Using my materials/layup, I calculate that an 8" diameter tube would be about 16g/lineal inch (including the 5mil polyester liner) and would still easily withstand 1000 psi. In fact, if calcs can be believed, it would probably work up to a diameter of about 12" (having a mass of about 24g/lineal inch). There is no need, however, to use 5mil film; 2 mil should work just fine and would cut the 8" mass to about 15g/lineal inch and the 12" to about 21-22g/lineal inch.

That can make for some pretty light tanks if one could figure out a solution to the end cap problem. Like you, I first considered machining some aluminum ones, but the lightest I could come up with for the 8" size was about 800g (assuming only a few thou of deflection at 1000 psi). I next considered machining down the aluminum to about 1/16" and reinforcing it with ribs of CF/epoxy; a rough estimate (no FEA) got the mass down to about 270g/cap--still heavier than I'd be happy with.

The answer, it seems to me, is to fabricate the caps as part of the tube fabrication process. This is tricky (you have to be able to remove the mandrel), but I think I've devised an approach which should work. I'm making the tooling for a 4" tank to just see if the approach is workable. If it holds water (literally), then I may try an 8" version just to make sure that reality agrees with calculation. If successful, the end cap for the 8" closed end should be about 100g and the other end (with the bung) maybe 150g (rough guess).

At that point you'd have a tank capable of holding 100kg of peroxide that would weigh a little less than 1600g and only be about 85-90" long--that should help out the mass ratio quite a bit. Interestingly, a tank that would hold the same amount of nitrous would be only about 15" longer and 225g heavier. The mass budget (as I calculate it) for a liquid CO2 pressurizing system for peroxide would be over 2500g (tank, pressurant (2300g), a bit of tubing, a couple of fittings, and a fill-valve of some sort). When the tanks get light enough (and stay small enough) the lower density of nitrous is offset by it being self-pressurizing.

I know you've made large investments in peroxide, but to me it seems that for vehicles of the size currently under discussion, a nitrous-based approach would be logistically simpler (nitrous is easier to procure and store and no concentrator is required), would reduce the complexity of the rocket itself (no separate pressurizing system), would reduce the mass of the tankage & associated plumbing, and would reduce the mass of the motor (no cat pack, no motor casing to contain the cat pack). As I say, I know you're in favor of peroxide, but if that's not a cast-in-concrete constraint, nitrous might be worth a second look.

While I'm throwing out suggestions, I'll add this: if you haven't already, perhaps consider a bladder (in the oxidizer tank) to hold the fuel. If you're RF-welding the polyethylene tank liner anyway, doing a bladder would be easy, it won't take up much space in the tank, makes the plumbing easier (no separate fuel line to route around/through the oxidizer tank), it cuts down on tank mass, and you don't have to pressurize a separate tank. I've looked at doing this with a nitrous tank and while I haven't actually done it, it just doesn't look that hard.

Soul of Healing Soul of Healing offers healing for both individuals and their home and work environment. The professionals of the center render therapy services using a unique blend of channelled healing energy, clairvoyance, spiritual guidance, vibrational essences and crystals.

Best Restaurants Sydney Soho in Balmain is recognized among the best restaurants in Sydney for providing the perfect partying destination in Australia. From mouth watering starters to delicious cuisines, they offer a wide range of popular dishes and beverages that are sure to make any business or individual party rocking and memorable for everyone.

I was very impressed by this post, this site has always been pleasant news. Thank you very much for such an interesting post. Keep working, great job! In my free time, I like play game: superfighters2.net. What about you?

This article is really fantastic and thanks for sharing the valuable post.

I felt pleasure in reading your blog and agree with the points that you mentioned clearly. I also noticed that your blog addresses a lot of students whose main worries relates to academic concerns and assignment parts. However, My Assignment Services has the capability to provide the best assignment help Malaysia, Australia, USA, Canada, Malaysia, South Africa, and many around the whole world. They have experts who handle every assignment type such as essays, reports, or even academic blog writing help. They have a number of experts who provides you full fledged assignments at the best quality. They keep on running major discount offers by which students can opt the best assignment expert to help you at minimum possible prices. We provide our specialised assignment help Malaysia in every disciplines that you are dealing into. Just visit our website, state your requirements and leave the rest on us.

Hey, your post is very informative. At AbAssignmentHelp, we are the assignment help provider. If you have any issues related to making an assignment then you can discuss with us, and we will provide you the best writing services at a budget price.

The submission date of the assignment is near and still, the work is not completed, here introducing instant assignment help Australia service just for you. The connecting with Assignment Help service is as easy as making a cup of tea, our support team is always ready to assist you.

Need help in your assignment! Our experts’ writers are ready to help you immediately in MBA assignment help and we ensure you Assignments written by us are plagiarism-free and error-free.